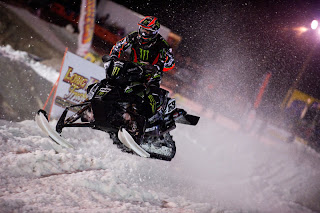 Friday night was a mix of highs and lows for the defending Pro Open Champion. Qualifying fourth with two second-place finishes in the preliminary rounds, Hibbert got a mid-pack start in the 14-lap, 15-rider main event. By the end of lap two, he moved into fourth and had his sight set on the leader. Despite turning the fastest lap of the night with a blistering 48.88, one second faster than any other rider, two separate crashes prevented him from battling for the win. With an impressive show of speed and determination, he finished seventh.

Hibbert set the bar high Saturday with two dominating runs in his qualifying rounds making him the number one rider for the main event. Another mid-pack start forced him to fight through the field to catch holeshot winner Ross Martin. Hibbert chipped away at Martin’s lead, clocking the fastest lap of the night on lap four. The following lap, he made the pass on Martin in a hairpin, right-hand corner. He pulled a gap but after a couple mistakes, Martin took back the lead. Both riders got into lapped traffic and after Martin bailed off his sled in a corner, Hibbert sailed to the finish line for the win.

Next up for Hibbert is the final ISOC National event of the season Saturday and Sunday in Lake Geneva, Wisc. The ski hill at Grand Geneva Resort is only a short drive north of Chicago and traditionally features the biggest track of the season. 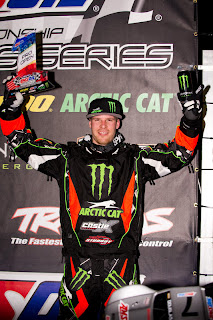 Tucker Hibbert – #68 Monster Energy/Arctic Cat
“It felt really good to win both qualifiers and the main Saturday night. I’ve only done that once this year. Other races, I would have good qualifiers and a bad main or bad qualifiers and a good main. To put it all together again feels great. This weekend, I was really motivated after a mediocre weekend in Fargo. I focused on intensity, especially at the beginning of the races to put myself in a position to run up-front.
I’m excited about the last two races of the year. Lake Geneva is always a great event.  Now, I know I’m ready to win and have the speed – it all gives me confidence.  Saturday night got the ball rolling for us (the team) to finish the season strong.”