Hibbert recently returned from Russia where he was crowned the 2012 FIM Snowcross World Champion. Last weekend at his home event near Fargo, he was undefeated in all-four qualifying rounds and finished third and fifth respectively in the finals. He is determined to carryover his dominate qualifying performances from Fargo to the final events this weekend in Elk River.

Pro Open racing kicks-off at 6 p.m. Friday and Saturday night with final events at 9 p.m. Fans can stream the event live online at www.ustream.tv/xsantv-isocacss and catch the behind the scenes action on NBC Sports Sunday, April 1 at 5 p.m. EST. 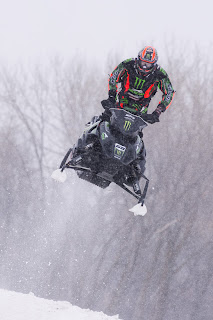 Tucker Hibbert – #68 Monster Energy/Arctic Cat
“It’s nice to have another race in Minnesota and close to home. ERX is an awesome facility. I’ve spent some time practicing there over the past couple years and am excited to see how it will be set up for a national. I know ERX can pull a big crowd for a local race so I expect there to be a lot of fans there this weekend.

My goal is to win both main events in Elk River. The team has been working really hard on my sleds and I’m really confident we have what it takes to win. I’m looking forward to a solid week of practice and driving to Elk River Friday morning prepared to put my Monster Energy/Arctic Cat on top of the box.”