March 14, 2012 – Tucker Hibbert, the defending ISOC National Snocross Pro Open Champion, is set for the final ISOC event of the season this weekend in Lake Geneva, Wisc. Hibbert will not be fighting for the title at the Nielsen Enterprises Grand Finale at Grand Geneva Resort but will be contending for the final two Pro Open wins of the season. 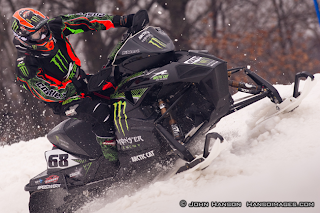 In February, Hibbert missed two rounds of the ISOC Tour after they were rescheduled for the same weekend as the 2012 FIM Snowcross World Championship. Hibbert traveled to Russia to represent the United States and went on to win his second world title. While in Russia, he missed the opportunity to compete for 90 ISOC Pro Open points – dashing his chances to defend his title.
Hibbert is hot off a perfect run last Saturday at the ERX National in Elk River, Minn. He hopes to carry his winning momentum into this weekend’s Grand Finale event.
Pro Open racing kicks-off Saturday at 2 p.m. with the final at 5:30 p.m. Sunday’s Pro show runs from noon to 6 p.m. Fans can stream the event live online at www.ustream.tv/xsan-isocacss and catch the behind the scenes action on NBC Sports Sunday, April 29 at 5 p.m. EST.
Tucker Hibbert – #68 Monster Energy/Arctic Cat
“Lake Geneva will be an exciting event even though I’m not in the championship points battle. I’m ready to win races and have nothing to lose. After last weekend, I know we (the team) have everything put together so we’re in a position to win. We’re focused on finishing the season strong. It’s a crazy thought that we’ll be racing in 60 to 70-degree weather but it will be awesome for the fans!”
Autograph Signing at Road Track & Trail
What: Autograph Signing and Meet-n-Greet with Hibbert
When: Thursday, March 15 from 5:30 to 7 p.m.
Where: Road Track & Trail – W228 S6932 Enterprise Drive – Big Bend, WI 53103
Fast Facts
• Hometown: Pelican Rapids, Minnesota
• 2012 and 2010 FIM Snowcross World Champion
• Six-Time National Snocross Champion – 69 National Pro Wins
• 10-Time ESPN Winter X Games Medalist
• 2011 ESPY Award Nominee – Best Male Action Sport Athlete
Noteworthy
Monday afternoon, Hibbert will catch a flight to Sweden to compete in the Super Snowcross event at Clash of Nations (CON) March 23-24. CON will also feature Freestyle Snowmobile along with Snowboard and Ski Big Air.
Resources: tucker-hibbert.com • monsterenergy.com • arcticcat.com • isocracing.com