Check Out Our HUGE Winter Sale!

Pelican Rapids, Minn. (August 15, 2012) – In what will be a pairing of two Minnesota two-time World Champions, snowmobile snocross racer Tucker Hibbert will throw the honorary first pitch at a Minnesota Twins baseball game on September 12. Hibbert is the two-time defending snocross World Champion, while the Minnesota Twins were Major League Baseball’s World Series Champions in 1987 and 1991. 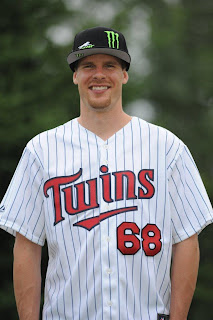 Photo Credit: arcticinsider.com
“It’s an exciting honor to throw the first pitch for the Twins, but I’d be lying if I said I wasn’t nervous,” said Hibbert of Pelican Rapids, Minn. “My experience on the track probably won’t help me on the field and my ball skills are limited to one summer of youth baseball. I’m hoping to throw close to home plate and without hitting the mascot!”
Hibbert has amassed two snocross world titles, six national championships and 10 ESPN Winter X Games medals while racing a Minnesota designed and built Arctic Cat snowmobile. Arctic Cat was formed in 1961; the same year the Twins played their first season in Minnesota.
Hibbert’s pitch will take place Wednesday, September 12 at 6:45 p.m. kicking off the second of a three-night series against the Kansas City Royals. The game will be live on FOX Sports Net. Tickets are available on www.minnesotatwins.com or by calling (800)-33-TWINS.